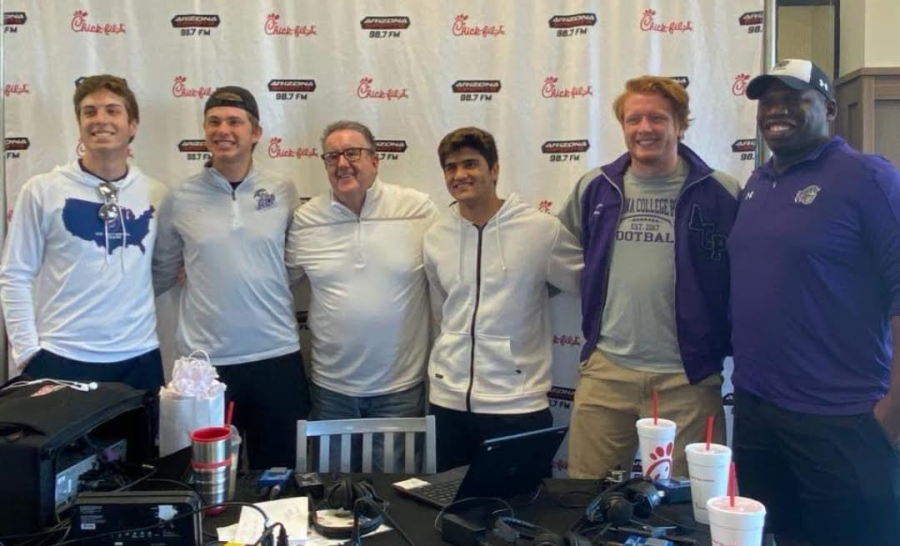 On Saturday, November 2, Kellen Gibson, Saar Zutshi, Joel Diaz, and Mark Chavez along with Coach Blueford had an incredible opportunity to talk on Kevin McCabe’s, also known as, “Dean of High School Sports!” radio show! Every Saturday morning he hosts a show from 9-11 a.m. on 98.7 FM Arizona Sports Station, called AZ Prep Live, where he interviews and highlights high school athletes and coaches from all over the state. The show was live and took place at Chick-fil-A in the morning. He interviewed people from our school and players from Hamilton High as well. They were invited to talk about the team’s 8-2 season and first-ever football playoff appearance in school history against Blue Ridge High School on Friday.

In the interview, McCabe asked Coach Blue if he thought that this year was the year to have an 8-2 season and  chance to compete in the playoffs. Coach Blue responded as to how he actually believed that this year would be the best. He thought so because they took appropriate steps each year and acknowledged that everyone worked harder. He continued by saying that in the off-season, the team started talking about winning, which was something they usually never talked about. That was also when he knew that the they were on the right track and was expecting something to happen this year.

Joel Diaz also mentioned how proud he was of the team, especially going from 1-9 last year, 2-8 the first season, and then being able to make a complete turn around, having an 8-2 season. He has always been excited about being on the team and now with the results, he thought it really showed how much work they put in for the team. Mark Chavez emphasized on Joel’s point, saying that it was amazing to see how the whole program developed and that the win against Gilbert Christian (21-0)  was a great way to cap it all off. Kellen Gibson explained how the first two years were pretty emotional and that this year was a blessing and a lot of fun to share it with. When McCabe asked what the key was and how they were able to do what they did this year, Kellen said that they have been doing the same thing for the last three years and thought something finally clicked this year, where they started to get more experienced and made bigger plays. Finally, Saar Zutshi explained that coming in as sophomores and freshmen three years ago, they had no idea what it was going to be. However, going through two rough years, he thought that the experience and chemistry between the teammates had really helped them play more loose and had more fun, which really led to their success this year.

They ended the show by talking about how determined they were for the playoffs this Friday. Their set goal was just on taking it all the way and winning the gold ball trophy.

Congratulations to the football team for making it to the playoffs and for this amazing opportunity. Good luck Knights!