Knights on Stage Present Ax of Murder: A Chilling Performance 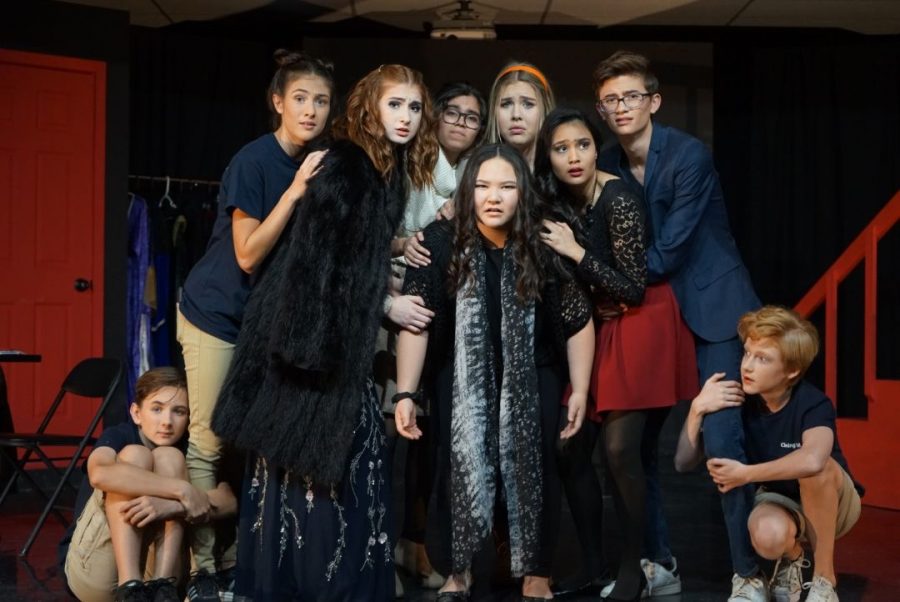 A group of people stand spread across the stage, all of them bickering loudly. Suddenly, the lights begin to dim and they erupt into irritated, yet frightened whispers. Just as they’re calming down, the sound of a gunshot is heard. The actors begin to scream, horrified as they try to figure out who has the pistol and who shot it. The lights come back on and the actors begin to check if everyone is fine. As they finally settle down, a character emerges from the depths of the curtains. One of the actors screams at the girl, saying that she’s the one who has the pistol, that she’s the murderer. A script is covering the girl’s chest, and she chuckles lightly before removing it, revealing a bloody mess as she proclaims that, “I don’t have the gun, just the bullet”, and falls onto the ground gracefully.

ACP’s Knights on Stage, known as KOS, presented a chilling and terrifying performance in their fall play, the Ax of Murder. Performed in theaters across the country, Ax of Murder was written by Pat Cook and KOS perfectly adapted it to suit our school.

The play revolves around a group of actors in a small theater and a haunted script. The protagonist of the play, Colleen Chambers, played by junior Hannah Prost, is an unpredictable and flighty writer who brings a variety of her plays for the theater company to choose from. Director Bonnie, played by Ellie Takeuchi, and actresses Taylor and Lucille (played by Sam Rojas and Kaiah Walsh respectively) pick out a play called “Ax of Murder”. Colleen insists that they do not want the play, as it is haunted and “bad things happen” whenever someone reads it.

Despite Colleen’s efforts to dissuade the actors from using the script, the arrival of fancy, obnoxious actress Delia (Quiana Moreno), and Brady and Phaedra Parks (Sean Leinenweber, Orchee Syed), whose marriage is a mess, makes the actors believe that Colleen is lying and that play is not haunted. As they start to read the play, spooky incidents start to happen as the tragic death of a past actor, Jeffrey Thatcher, is revealed and one of the technicians is murdered by an ax (technically a hatchet, as Brady insists throughout the play’s events) after reading the script.

Most of the actors believe that Colleen is the murderer and after she is supposedly “trapped” in the theater with them and the rest of the weapons (props, used by the company, which were left lying on a table) disappear, they began to freak out, playing on their own superstitions and blaming each other. Sergeants Mike and Michelle (Jared Riley, Natasha Will) appear to investigate the murder of Jeffrey Thatcher and take Colleen in for questioning. They come back and tell the actors that Colleen insisted that Jeffrey Thatcher is trying to get back at his murderer through the script. The next person to get murdered, is in fact, Colleen.

At the end of the play, Phaedra confesses to murdering Jeffrey Thatcher accidentally, after he threatened to tell Brady that she was flirting with him. Suddenly, Colleen appears with the rest of the police force behind her. She and the sergeants explain that this was all a set up to find Jeffrey’s murderer and that the play is not actually haunted. Colleen then unveils that her full name is “Colleen Chambers Thatcher”, Jeffrey’s sister, and that she wanted to avenge his death. They then disclose that Mike and Michelle are actually Mike and Michelle Aks, and that whenever Colleen would call the station, she would ask for “Aks of murder”.

Hannah Prost, who played Colleen Chambers, is an aspiring young actress who I have the honor of being friends with.   I asked Hannah if she could answer some questions about the production itself to give us a little insight from the perspective of an actor. She, of course, happily complied:

Q: How long have you been in theater?

A: I’ve been in theater for two years.

Q: What was your favorite part about the play?

A: My favorite part of the play was definitely the new friendships I got to make and how much of a family theatre is. Throughout performing Ax of Murder, I formed strong bonds with many of the cast members, and I’m so grateful for that opportunity. Rehearsals were definitely a blast as well, despite being so long. It’s some of the most fun I’ve ever had.

Q: How long did it take KOS to prepare for Ax of Murder?

A: We prepared for Ax of Murder for about three months. Most of our rehearsals took place after school.

Q: What did you do to get into character?

A: To get into my character, I started with creating a character biography. I wrote everything about them: their age, job, favorite color, etc. Making a character bio allows for you to connect more with your character and put meaning behind the words you say on stage. In addition, saying your lines in different ways while practicing helps to develop your character as well as memorizing your lines. For Colleen specifically, I practiced my dying scene the most. I had to learn how to make my breath sound ragged and as if I was dying, while also projecting and enunciating my lines. Right before going on stage before my death scene, I’d take a moment to control my breathing and make sure it was the way I wanted.

Q: What’s it like performing in front of so many people?

A: Performing in front of so many people is scary, but also exhilarating. In my experience, stage fright was always the worst right before the show started, but once I got up on stage everything fell into place and I felt comfortable. It’s definitely an amazing experience to share what you’ve been working on for so long with other people.

Q: Did the cast do anything special after the last performance?

A: Yes! After the last performance, the cast and crew gave flowers and thanks to our director, Mrs. Lewandowski. Then we hopped over to Denny’s and spent some time celebrating. After a show, there’s usually a cast/crew party as well.

Thank you so much to Hannah for taking the time to tell us more about KOS and how actors get into character! All of the aforementioned actors were brilliant in their acting and truly brought their characters to life through a comedic murder mystery that left the audience spooked, yet captivated. A huge congratulations to all of KOS for an amazing performance! We can’t wait to see what you have in store for us next!