Our school’s robotics teams participated in the Chandler Invitational Robotics Tournament on November 2.   Of the robotics season, this is the first tournament they participated in, and it was spectacular!  Everyone that came was bursting with excitement and pride in their machines.  The crowds were rowdy and boisterous, cheering on the robots, while different teams were called over the loudspeaker for their chance to wow the crowd with their brilliance.  The whole vibe of the place was intelligent excitement and competition.  There is a lot of creativity and hard work that goes into the robotics teams’ robots and in the tournament it was very obvious the amount of dedication to ingenuity there was.  They did very well for their first tournament and ACP is proud of their accomplishments.

In the tournament they had their machines complete against robots from across the state to complete an action the closest, best, or fastest.  They are then scored on their performance and given points.  I interviewed Elizabeth for more information on the tournament and robotics in general.

Q: What were some of the things your robot had to do?

A: Our robot is made to pick up cubes through a rolling intake, and it creates a stack of those on the tray.  It then places the cubes in a scoring zone by tilting the tray forward to a 90 degree angle.

Q: Did you participate more in the building or coding of the robot?

A: I participated more on the hardware side, so I worked on building the robot.  We only have one coder on our team. 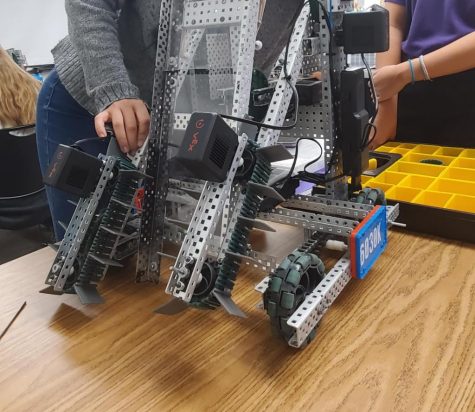 Q: How many teams does ACP have?

A: ACP has four teams: the Madges, the Blacksmiths, the Knights, and the Jesters.

Q: How do the tournament’s work in terms of placement and points scoring?

A: During the tournament, there are preliminary matches called Qualification matches in which teams will compete several times in order to establish the ranked order of the teams.  From there it goes to elimination where it works like any bracket sport and if you lose you are out.  Placement is only first place, but other awards are still available and can qualify you for state such as the Excellence award, which goes to the team the judges think did the best overall even if they didn’t win.  Scoring is mainly how many cubes are stacked in a scoring zone, but placing colored cubes into towers helps to increase the point value of that colored cube.

Q: What is something people don’t really know about robotics?

A: Most people probably think robotics is something like battle bots but it isn’t anything like it.  VEX robotics is about problem solving.  Each year you are given a game and you need to build a robot to score as many points in that game as possible.  In fact, it is in the rules that you can’t destroy or damage other robots on the field.

Our robotics team did their best, and it was amazing!  We can’t wait to see how our robotics teams do the rest of the season.  Good luck!  Way to go, Knights !