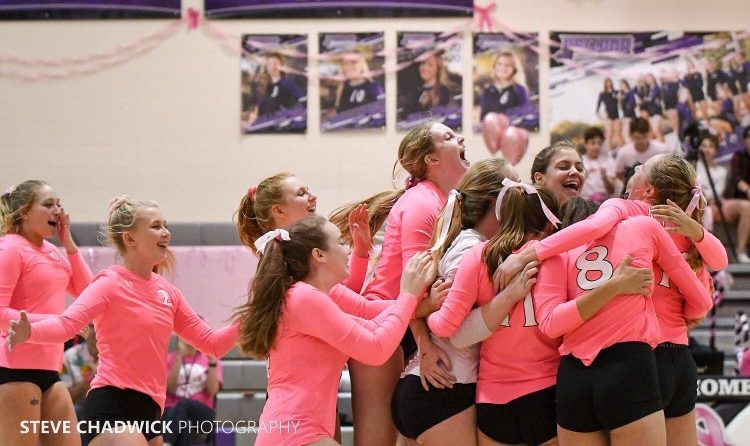 This year the girls varsity team defeated the American Leadership Academy in Gilbert with a successful 3-0 victory. They won the first set 25-23, and the second and third set with 25-16 each. Julia Golichowski (12) spearheaded the team with 27 assists, seven kills, and six service aces. Krista Rowan (12) helped by obtaining 11 kills and Tendall Weigand (12) secured seven kills for the team. The team significantly raised over $7,300 for the Dig Pink cause. Despite being only $700 shy of their $8,000 goal, the girls were beyond excited and proud for raising more money than in past years.

Julia, who has been playing volleyball since fifth grade and ACPVB since seventh grade at Oakland, made varsity her freshman year and plays setter. She recently committed to Palm Beach Atlantic University in West Palm Beach, Florida and plans to continue her volleyball career by playing beach volleyball for them.

Considering that she led the team to victory, I asked Julia some questions to help give ACP family and friends more insight to the magnificence and splendor of our talented volleyball players and their victorious match. Here’s what she had to say:

Q: Can you describe the moment you won and what it felt like?

A: Winning the game was such an amazing feeling. The entire team played so cohesively throughout the entire match and knowing that the game and the event was for such a good cause made the win even more special.

Q: How did you celebrate the win?

A: Since it was a school night, we couldn’t party too hard, but Krista (Rowan) and I did go get some Canes afterward.

Q: How long has ACPVB (ACP Volleyball) been participating in Dig Pink games?

A: This was our seventh annual Dig Pink!

Q: Why is the Dig Pink game so important?

A: The Dig Pink game is so important for multiple reasons. Not only does it help raise awareness for breast cancer and fundraise to find a cure, but it also inspires hope among so many families who have experienced the battle with breast cancer first-hand. Millions of women suffer from breast cancer and this event allows us to be brought together, and to keep our hopes and spirits high, even in the most difficult of times.

Q: How did you successfully raise so much money?

A: ACPVB has multiple fundraising tactics. Our primary tactic is having each player send out emails to their extended family, friends, neighbors, or anybody else who they’re close with and inform them of the game and what we’re fundraising for. We also post on all forms of social media very often with information and links to the fundraising pages. Each year in the past we’ve raised about $3000+, but this year we’ve raised $7600+ and still counting, and a huge part of that is including battle of the classes into fundraising. We also came up with some more creative forms of raising money this year, like letting students throw water balloons at their chosen volleyball player if they donated. Essentially, nothing is off the table for ACPVB & we’re always coming up with new ideas to raise money!

Q: How did you train for the game?

A: Although we knew that this game was extremely important, we kept our training fairly consistent. We continued to practice and work out in locker everyday in order to prepare. Coach Orr also analyzed our most recent games, discovered our weak spots, and made sure to cover those even more in practice. This may have been a key game in our season, but we wanted to play as consistently and effectively as we always do, and in order to not add too much pressure, we kept our training the same.

Q: What do you do to prepare for a game?

A: In order to prepare for a game, we usually do some brief ball control exercises in locker. That way, we’re working on essential skills for the game without tiring ourselves out too much. We also have each player assigned to a team gift/motivation for every game, which is presented to us before we play so we can get in the right mindset. Plus, watching the freshman and junior varsity games always hypes us up, too, because we love watching all of the ACPVB teams play their hardest.

Q: What do you love the most about volleyball?

A: The thing that I love most about volleyball is getting to practice and compete every day with my best friends. It has given me so many new friendships and has taught me so many life lessons, and I wouldn’t trade my six years with ACPVB for anything.

A huge thank you to Julia for taking the time to answer these questions for us! Congratulations to the girls on winning yet another game for ACP and raising an enormous amount of money for a noble cause. Way to go, Knights! Make sure to watch the girls play Rancho Solano tomorrow at 6 p.m. in the ACP gym.