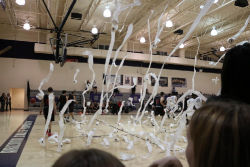 The ACP varsity boys basketball team did not disappoint with a thrilling 62-58 win.

ACP held its annual Royal Flush basketball game, celebrating the first home game for the varsity boys basketball team against the Tonopah Valley Phoenix. But before a roll of toilet paper was thrown, those who were lucky enough to arrive at the gym early witnessed a thrilling 38-34 comeback victory by the ACP varsity girls basketball team. The girls trailed early, but slowly clawed their way back into the game before taking control in the 4th quarter and pulling out the win to improve their record to 2-2.

Before the ACP faithful could catch their breath from watching the varsity girls’ team thrilling win, the varsity boys took the court in front of a gym filled to capacity. During pregame introductions, the crowd was loud and pumped up for the first home game of the season. Things quieted slightly once both teams took the court for the tip-off. The Knights started off slow, allowing 9 early points, while not sinking any shots on the offensive side. The Knights were fouled twice early, leading to 4 free throw chances. However, the Knights were unable to make any of them, leaving the crowd on the edge of their seats, wondering 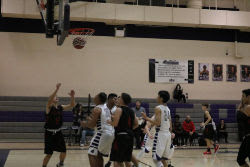 when they could throw their rolls of toilet paper. It is possible that the team was aware of the situation and put extra pressure on themselves to make the first basket that they couldn’t get any shots to go into the basket. Trailing 9-0 three minutes in, the Knights finally got on the board thanks to team captain, Habi Ortiz. As the ball fell into the basket, the crowd let out a huge roar and sent toilet paper flying everywhere! It was a sight like no other. The basketball court, once clean and pristine, had been littered with white toilet paper from end line to end line.

Following a short delay to allow for toilet paper cleanup, the game resumed with the Knights trailing 9-2. With the first basket out of the way, a huge weight appeared to be lifted from the team’s collective shoulders, and it showed on the court. In the next two minutes, the Knights would come storming back to tie the game at 9 late in the 1st quarter. The Knights seized the momentum of the first basket and turned it into a 13-4 run to finish off the first quarter tied at 13, even pulling out to a 20-16 lead early in the second quarter. After a slow start, this game quickly turned into an offensive shootout, as both team’s offenses caught fire in the second quarter. Both teams were unstoppable, draining shot after shot, eventually leading to a game tied at 26 halfway through the quarter. With the Knights leading 30-29 late in the 2nd quarter, sophomore forward Daniel Chukwu came up with a great block to keep the Knights’  lead intact. This was a lead the Knights would not relinquish. Shortly afterward, the Knights extended their lead to 36-29 and took a 40-31 lead into halftime.

From this point, the Knights began to pull away from the Phoenix, extending their lead to 48-33 at one point in the third quarter. Being up 15 points in the 3rd quarter, the Knights appeared to go into cruise control, taking a comfortable 56-42 lead into the fourth quarter. It appeared the Knights had this game all but wrapped up, but the Phoenix had other plans. The Phoenix started the quarter by scoring 5 unanswered points to pull within single digits at 56-47. The Phoenix made it interesting, pulling to within 7 points with only three minutes left in the game. The Phoenix offense appeared to find a rhythm in the fourth quarter that the Knights were unable to handle, allowing them to get back into the game. With just over a minute left in the game, the Phoenix drained a 3 pointer to pull to within 4 points at 62-58. With less than a minute left, and the Phoenix defense committing foul after foul, the Knights were unable to sink their free throws, which would have put the game on ice. Instead, the game came down to the final seconds, but the Knights were able to pull out the thrilling 62-58 victory to improve their record on the season to 6-2. 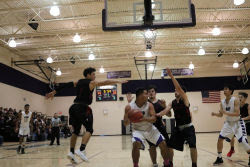 Freshman forward, Lucas McDougall, led all ACP scorers with 16 points, while junior and team captain Habi Ortiz made his contributions underneath the basket, recording a double-double with 14 points and 11 rebounds.

The Knights take a small road trip to Chandler Prep to take on the Titans on Monday, December 11th. The varsity girls take the court at 6 P.M., and the boys follow at 7:30. The next home games will take place on Thursday, December 14th against San Tan Foothills, again with the varsity girls beginning at 6 and the boys taking the court at 7:30. We wish all of our Knights’ sports teams good luck!