Backstage With the Knight of Scenes Cast

At ACP High School, many of our students are not only amazing at academics, but exceed in their extracurriculars as well. From running festivals and fundraisers to getting in top five at tournaments, the Knights are known to be multitalented and well-rounded individuals. Today, we’re shining the limelight onto one group of the many gifted and skillful students at our school: the ACP Theater Program. Abbreviated K.O.S. (pronounced “chaos”), the Knights on Stage are a group of dexterous actors that have been running the theater program at our school since 2019. From putting on the most comedic to the most sentimental performances, the applause that they receive from their shows is much deserved. A few weeks back, our Knight thespians paraded onto the stage once again for their most recent program: “Knight of Scenes”, a combination of well-known songs from various and equally well-known plays and movies. Representing the performers are Elizabeth Weiss and Carmella Baldwin, who are here to indulge in their experiences at the theater and more.

Elizabeth and Carmella are both seniors at ACP High School. Elizabeth works as an aide for the Sports Medicine program and partakes in other various on campus clubs. In her free time though, she likes reading and painting, as well as spending time with her family. Apart from theater, Carmella considers herself a very physically active person, proving this statement with her participation in athletic actives such as basketball, flag football, cross country, and track. When she’s not exercising, Carmella enjoys watching movies, doing art, roller skating, and cooking. When asked about their theatrical lives, Elizabeth states that she has been in theater since the second grade. “I’ve always loved acting,”, she remarks, “Especially improv because you get to be creative and experience being someone completely different. Acting allows me to express myself, but also to entertain, allowing me to enjoy it when others enjoy what I do.” Carmella states that she’s been in theater for four years, getting into it “when my best friend convinced me to audition for the school play my freshman year” and sticking with the activity when she realized how much fun she was having. 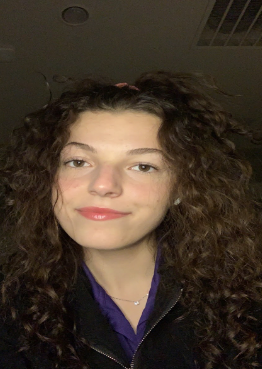 Carmella reminisces on the performance, elaborating that she worked on her part three weeks prior to the performance. “I learned a lot about directing, as well as enjoyed meeting new people and acting alongside my friends.” Elizabeth looks into the future, giving us a preview on the hard work that our Knights are putting into their upcoming performance, which is a Halloween-themed edition of “Knight of Scenes” called “Spookfest Night”, featuring songs and performances from beloved Halloween movies that’ll set you in the mood for trick-or-treating. Elizabeth comments that rehearsals have started a week ago, and she was pleasantly surprised when she saw the cast list going up. “The process of directing a scene”, Elizabeth explains, “has been a good change from always being the actor because it gives me a new perspective on acting and the thought that goes on behind the movements. I definitely think deeper about why I am making an action on stage now and approach performances with more intentionality.”

Even though you have missed the first Knight of Scenes, that doesn’t mean that you have to miss the next one! Keep your eyes peeled for flyers and your ears open for announcements on not only Spookfest Knight, but also K.O.S.’s rendition of the the popular “Mamma Mia!” movie. If you’re interested in taking a part in any of those performances or interested in being a part of the thespian culture of ACP High School, contact Mr. Bozovich in room E111. That’s enough of a sneak peek that I can give you in today’s article, so now it’s your responsibility to check out the actors in the auditorium in the E building when the night comes for the spotlight to shine on them. Remember to strive for impossible and be extraordinary!