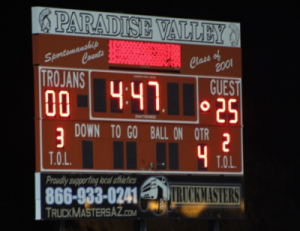 The First of Many

The Knights defeated Scottsdale Prep 25-0 for the first win in school history.

The Knights opened up sectional play on Friday night, taking on the Spartans of Scottsdale Prep. Coming off a 22-0 loss to Camp Verde the week before, the Knights were searching for both the first points and first win in school history. Scottsdale Prep came into the game 0-3, losing all three games by a combined score of 134-11, and looking to turn things around in this still young season. The Knights were able to play a complete team game, defeating the Spartans 25-0.

I recently talked with Coach Blue about the game on Friday and here’s what he had to say.

Q: Can you give me a brief rundown of what happened on Friday night?

A: We were able to start off strong on defense. The offense has been our Achilles heel. In the first half, we were finally able to get into the end zone and score our first touchdown. I think that boosted everyone’s confidence going into halftime. We should have put up more points, but we shot ourselves in the foot a few times. We really got rolling in the second half. Some of the touchdowns we did score were called back for a couple of questionable penalties. Our defense has been our staple; they only gave up 30 total yards the entire game. The defense was stout and has been, it’s just a matter of getting our offense going.

Q: Do you believe scoring that first touchdown played a factor in your 2nd half success?

A: Absolutely. I think the guys were stressing having played 3 games without scoring, so they were pushing more than they should have. Once they scored, they played more freely going into the second half. We probably should have scored more than we did.

Q: What is your assessment of the team 4 games in?

A: We’re where we should be. One thing about this team is not only are we teaching scheme to win games but teaching the game of football. I think we’re at a point now where they understand the game and the scheme and are getting more confident with it. We wanted to be competitive and know what we’re doing going into section play. We’re 1-0 in our section, and if we win out in section, we go to the playoffs.

A: We still need to improve in all aspects, specifically on offense. We left a lot of points on the field last game. There are still little things here and there that we have to fine tune on offense. The defense is going to continue to get better, and if they do that, it will give our offense more room for error. There is still an emphasis on consistency on offense.

Q: What are you hoping to accomplish these last 6 weeks?

A: I think we can make a push for the playoffs. I think we’re to a point where we’ll continue to improve. Santan Foothills will be the game that lets us know where we’re at in 3 weeks. We’re building up to that point, and I’m fully confident that if we can win that game, we can make it to the playoffs in year 1.

Q: What is the feeling around the team with a win now under your belts?

A: It was overjoyed at first, but they quickly turned it around and went back to business preparing for this game. They did a good job keeping it in perspective. I was a little worried about it, losing the first 3 games and pressing for that first score, and once it happened, we just had to sit back and see how they reacted. It was immediate joy getting that first win in history, but it was back to business Saturday and now we’re preparing for Glendale Prep. I’m happy with how they responded and the confidence in what they do and are focused on beating Glendale Prep, winning the Homecoming Game, and then moving on to the next week.

Q: Was there any advice you gave after the game on handling the first win?

Q: Are there any injuries or other concerns we should be aware of?

A: Kellen Gibson was injured the day after the game. He punctured his lung playing hockey, so he’ll be out for 2 weeks. He is one of our biggest producers on defense, but we have a few guys who can fill that role. Matt Furcone might be out for the rest of the season, we’re still waiting for his x-rays. I’m not 100% sure, but he may have dislocated his knee. 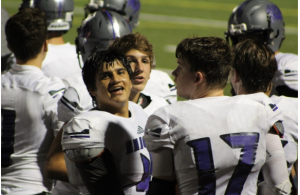 I also caught up with quarterback Mark Chavez and receiver Ryan Jeffers, who paired up to score the first touchdown in ACP history.

Q: How does this win affect your confidence going forward?

A: This was our first win in section play, so if we win the rest of our section games, then we can make it to state.

Q: What was the key to the offensive success on Friday?

A: The offensive line and the defense. Our defense, who hasn’t given a score in 7 straight quarters, held them, giving us great field position.

Q: What has fueled the team’s improvement from week to week?

A: Our offensive success. Our offense hadn’t played well the last few games and we finally started clicking 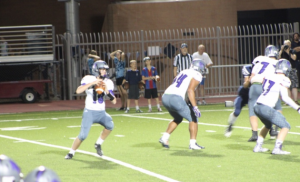 Alexi Aguilar
on Friday, especially running the football. We were able to score 3 rushing touchdowns.

The Knights return home for the Homecoming game on Friday, September 22nd at Andersen Junior High. The theme for this game is USA. The Knights will be taking on the Griffins of Glendale Prep. There will be a tailgate before the game at the west field from 3-6 P.M with transportation to Andersen for the game at 7. Be sure to come out and cheer on your Knights as they look for their second win in a row.