On Wednesday of this week, I went into Mrs. Hudson’s third-period class to observe, watch, and take pictures and notes on what goes on inside of culinary class! Her class looks very fun and welcoming, actually just by being in there and observing, I realized I want to take a culinary class next year! Taking culinary can help you decide what you want to do in the future or just give you fun hobbies to keep practicing even after the class is done. 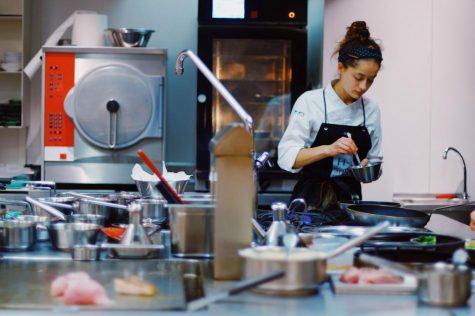 In the class, there are groups of three to four students that work together to make their food and to learn with each other. It is very hands-on and individual, students are mostly working with each other but get help/ advice from the teacher when they need it. Each group gets a recipe to follow and needs to find the ingredients, tools, and appliances that they will need. There are many precautions taken to ensure no accidents happen and everything is very sanitary. After each step, the group I was watching cleaned their surface, hands, and materials such as measuring cups.

For people that like to be hands-on but also enjoy the writing part of class, culinary is a great option for you. There is writing contributed to it as students were working on a lab sheet where they wrote down what they used and what they were doing. They also utilized these essential lab sheets for recording their progress/ data and writing about what they made. Everyone in each group works hard and everyone pays their contribution. It is not just one or two people doing everything and the rest just standing there. In the group I was shadowing, I watched one main person who got to instruct the people in their group, like a ” head chef” so to say.

There is a lot of trial and error in this class but, in general, students were bound to make a couple of mistakes. When students make a mistake they collaborate with their team members to see how they can fix it or try to improve. I saw a lot of learning from mistakes while watching students. One example of this was when a group made their dough a

a bit too dry, but instead of getting angry at themselves and each other, they decided to add more of an ingredient to the mixture to fix it.

A really fascinating aspect about culinary is after you make something you’re allowed to eat it. I think allowing your students to taste what they made really gives them a sense of accomplishment because they are eating something that they worked hard on. The vibe of Mrs. Hudson’s classroom is very warm and accepting, and I would definitely recommend taking culinary at some point in high school. We will hopefully be doing more of these activities where we put a teacher and their class in the spotlight because they deserve some recognition for the wonderful things they are doing at ACP! As always, be extraordinary and strive for the impossible!