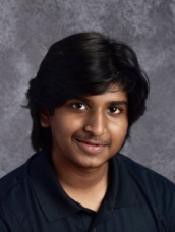 What is Vex Robotics, you might ask? According to the Vex Robotics website, it is defined as “A Robotics Program meant for elementary to University students”.  Every year, plenty of championships and competitions are held to show off the skills of the youthful, and some of our very own Knights recently won an excellence award in the World Championship for the Vex IQ Robotics Championship. One of the winners was Sidharth Kanderi in Team Overdrive, the following article are his answers to some questions we asked him.

A: Each year there is a different challenge, and this year was called “rise above”, which is these different colored risers (the game components) that you have to manipulate with your robot to score points. To be able to compete in the championship, you need to design and create a robot, going through the scientific process to perfect it.

Q: How long did it take you and your team to build the robot?

A: In order to get the first model of our robot, it took us about two weeks.  That was our first model and we were constantly revising the design and making choices.  We’ve even scrapped the robot a few times; the entire year we’ve all been constantly making changes.

Q: What put your team above the others and allowed you to win an award?

A: The team was me, my sister, my best friend, and his brother. So the four of us have known each other for almost all our lives,  the chemistry between all of us works well; we know how to handle disagreements and how to work with each other.  Our team was very committed to it; we tried to have two practices a week, two hours at a time.  Outside of the meetings as well, we all would do our own research on how to make it better.

Q: How is the robot controlled?

A: We have a remote control that we can tether to the machine, and it communicates through broadcasting commands at 5.3 Hz. It also has an autonomous mode where you can create autonomous code, download it to the robot, and it’ll run by itself.

Q: Are you and your team going to try out next year?

A: Me and Rohan, my friend, are freshmen now, so we’ve aged out of IQ, and we are now thinking of starting our own EDR team, which is the next level, while my sister and Rohan’s brother are going to continue with the IQ team and possibly have a new third member.

Q: Why do you do robotics?

A: For me, in fifth grade, my parents showed me this and I thought it seemed interesting, so I joined it. I really liked it, especially the community around Vex because they’re all very nice and welcoming, including the other teams. I also really just like doing robotics; I like building things. I didn’t like coding originally, but with this, I’ve come to enjoy coding, and above all, it’s just fun.

As Sid said earlier, he might be going to the next level of Vex tournaments, so keep an eye on this possible rising star in the Robotics Tournaments. I, for one, am excited to see what other things the bright students of our school will do in the upcoming years!