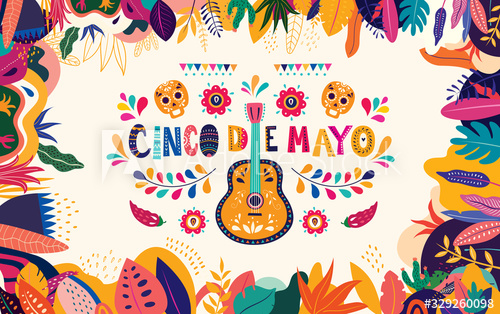 Even if our country can be heavily divided by political standing, social situations, and climate issues, there is one thing we can all agree upon that makes America, America. Fast Food? No. Football? Not quite. The fact that we celebrate every holiday imaginable (think of national hotdog day or pet your cat day) and even adopt holidays from other countries? You got that right! While Cinco de Mayo isn’t widely celebrated throughout Mexico, nor is it considered a national holiday, Americans take advantage of May 5th to party, celebrate, and indulge. Even so, do a lot of Americans truly know the origin of Cinco de Mayo and the historical weight it can or cannot hold? I would assume not. So, today, let’s dive into the history of Cinco de Mayo and the celebratory traditions that come about in the upcoming month!

You heard me right! Cinco de Mayo is not the day that Mexico gained it’s independence from Spain; it more surrounds a specific battle in the late 1800s against France. According to History.com “In 1861, Benito Juárez—a lawyer and member of the Indigenous Zapotec tribe—was elected president of Mexico. At the time, the country was in financial ruin after years of internal strife, and the new president was forced to default on debt payments to European governments. In response, France, Britain and Spain sent naval forces to Veracruz, Mexico, demanding repayment. Britain and Spain negotiated with Mexico and withdrew their forces. France, however, ruled by Napoleon III, decided to use the opportunity to carve an empire out of Mexican territory. Late in 1861, a well-armed French fleet stormed Veracruz, landing a large force of troops and driving President Juárez and his government into retreat.” This sudden government retreat led to what’s known as the Battle of Puebla, a large military shoot-out that took place in a small town in Eastern Mexico.

“From his new headquarters in the north, Juárez rounded up a ragtag force of 2,000 loyal men—many of them either Indigenous Mexicans or of mixed ancestry—and sent them to Puebla. The vastly outnumbered and poorly supplied Mexicans, led by Texas-born General Ignacio Zaragoza, fortified the town and prepared for the French assault. On May 5, 1862, Lorencez gathered his army—supported by heavy artillery—before the city of Puebla and led an assault,” notes History.com.

The battle itself only lasted a day, but it eventually led to a Mexican victory with casualty rates of less than 100 soldiers. As History.com concludes, “Although not a major strategic win in the overall war against the French, Zaragoza’s success at the Battle of Puebla on May 5 represented a great symbolic victory for the Mexican government and bolstered the resistance movement. In 1867—thanks in part to military support and political pressure from the United States, which was finally in a position to aid its besieged neighbor after the end of the Civil War—France finally withdrew.” Surprisingly enough, if the French did end up winning, it could’ve changed the tide of America’s Civil War, as the French planned on assisting the Confederacy via military bases in Mexico.

Celebrations Above and Below the Border

Cinco de Mayo is actually not considered a national holiday in Mexico. Instead, it feels like any other day, as banks and other establishments remain wide open. As for the actual town of Puebla de Los Angeles, traditions can include military parades, battle recreations, festivals, and a wide array of food. As for America, many Mexican-Americans take the day to celebrate their culture, traditions, and heritage.

History.com further states that “Chicano activists raised awareness of the holiday in the 1960s, in part because they identified with the victory of Indigenous Mexicans (such as Juárez) over European invaders during the Battle of Puebla. Today, revelers mark the occasion with parades, parties, mariachi music, Mexican folk dancing and traditional foods such as tacos and mole poblano. Some of the largest festivals are held in Los Angeles, Chicago and Houston.” One such traditional food, known as the official dish of the holiday, is mole poblano, a dark red sauce served with meat that usually consists of chocolate and other ingredients. Warning: it is quite spicy!

Hopefully, this gave you guys some insight into the true meaning of the holiday and it’s historical significance within North America! If you choose to celebrate, please do it safely and responsibly. As always, remember to strive for the impossible, be extraordinary, and put on some sunscreen, Knights!